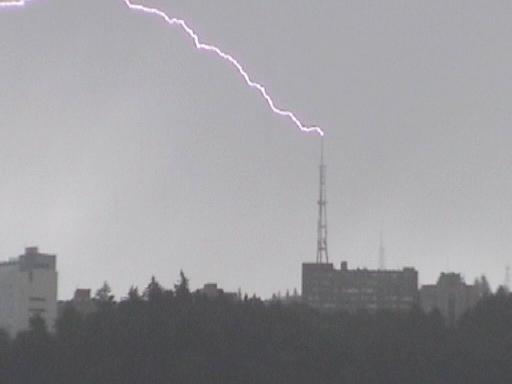 This is a picture of the Stonehenge Tower, in Portland, built in 1990. The picture is a video capture taken by Kevin Rogers, KD7HDN, from his balcony in downtown Portland.

Gray Haertig purchased the house next door to the north (right of the towers in the picture, behind the taller buildings) in 2002, and the property to the north of that which has the 270' tower you can faintly see to the right in the picture. The city of Portland insisted that that tower come down, but at that point Gray was left with an 1,850 sq ft, 1947 art deco transmitter building.

Between June 2003 and June 2004 Mr. Haertig remodeled the building into a 1750 sq. ft., 2 bedroom residence which he rents out. He also acquired the residence immediately to the south which he is remodeling for himself.

More about all of this is below. Read on! 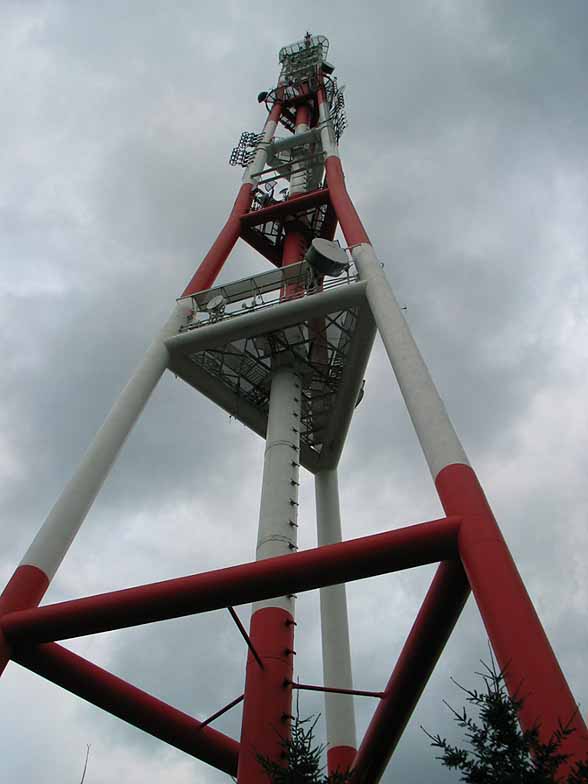 Gray Haertig was the Project Manager/Engineer for the owner. Total cost (including land, building remodel and owner's transmission equipment) was $7 Million. This structure is currently home to 9 FM's and a whole raftload of other stuff. It is a 600' self-supporting ferro-concrete structure. 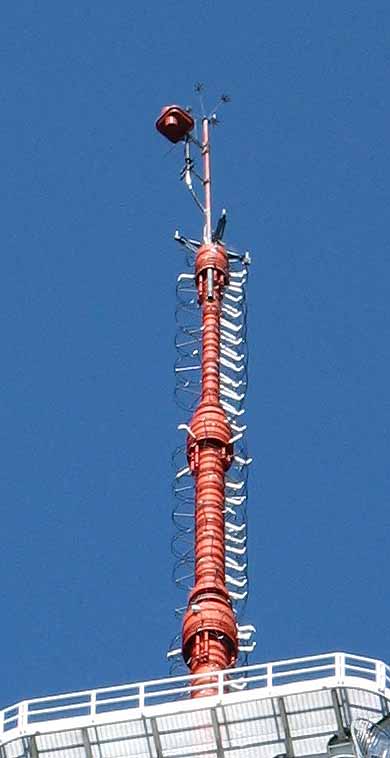 It is now 9 stations total - 8 stations on the combiner. 4 stations are doing HD, including KBOO. Six FM's get it together in a Shively balanced combiner with two more (including KBOO) feeding the wideband input using a branch combiner. It all feeds a Jampro Spiral antenna through MYAT 9-3/16" line. There is another FM station on a pipe above the main antenna using a Shively 1 bay 6810 DA. 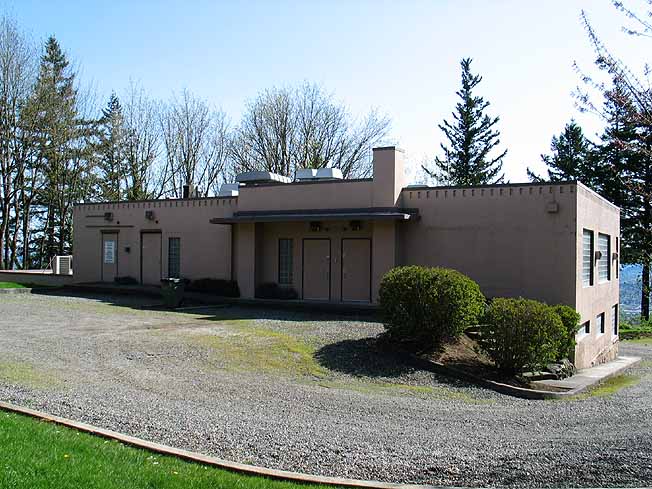 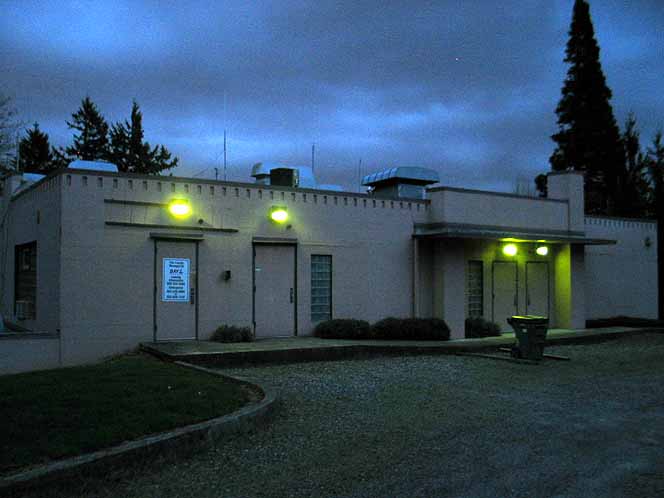 And the front of the transmitter building at twilight 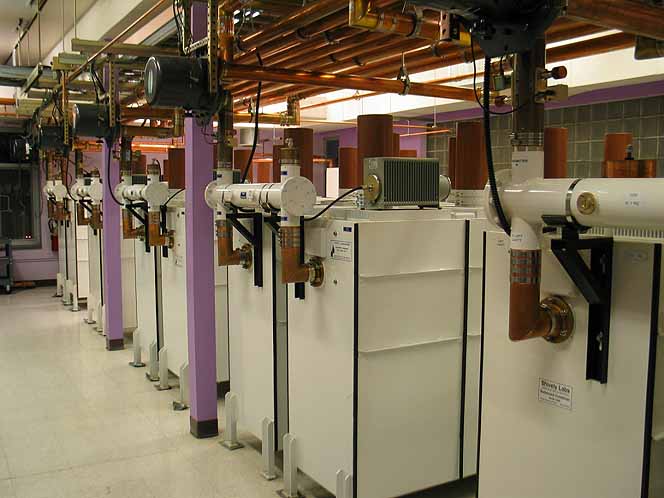 A portion of the Shively combiner 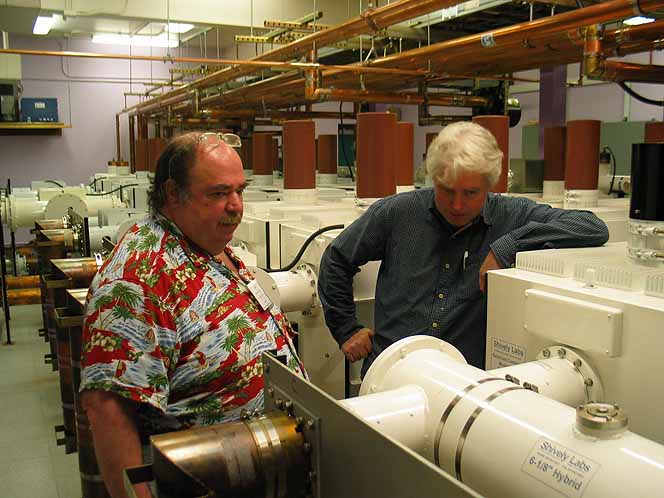 Gray Haertig and Simon Frech examine some of the combiner components. 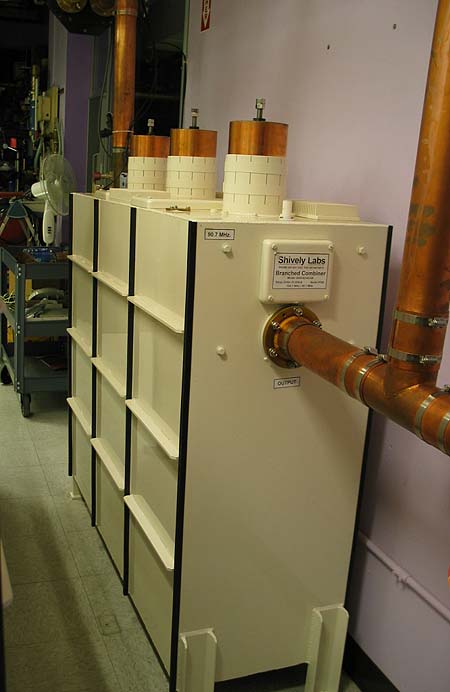 One of the branched combiners (this one is for KBOO 90.7 mhz.) 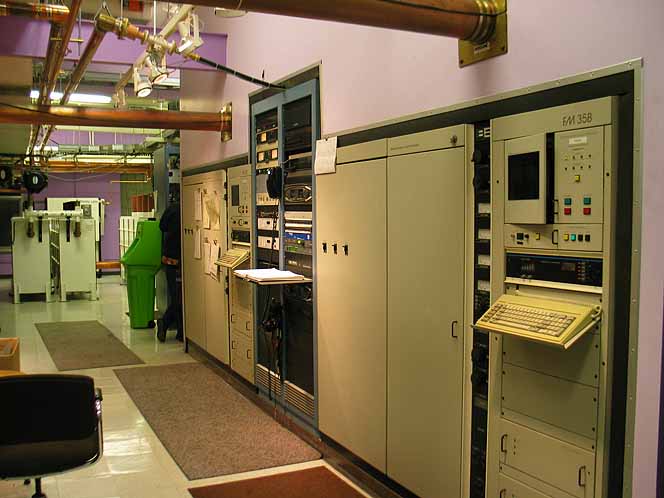 The view from the main transmitter room and engineering shop. 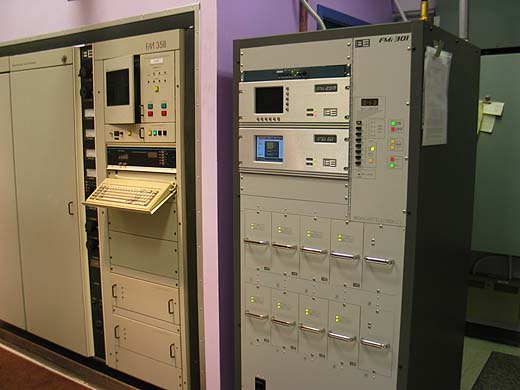 And yes, HD Radio is here too. 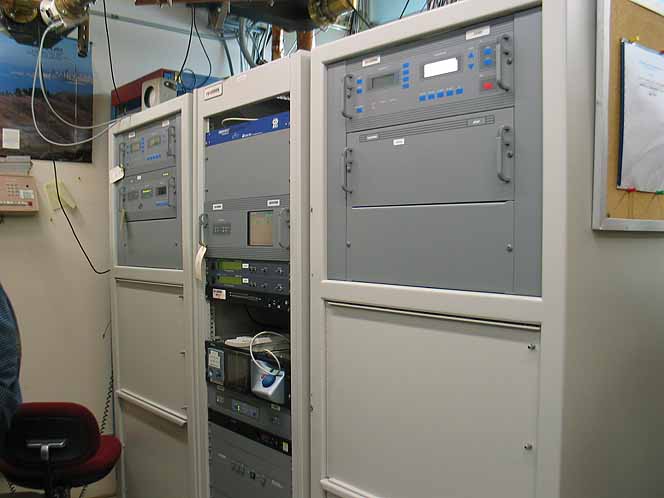 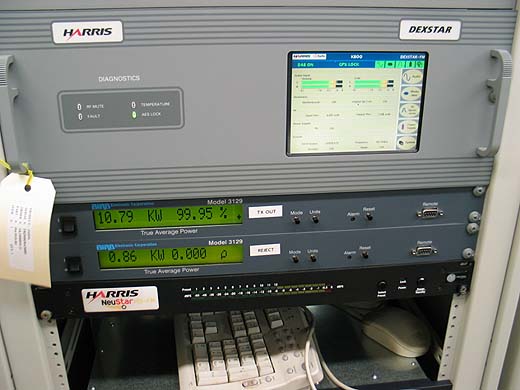 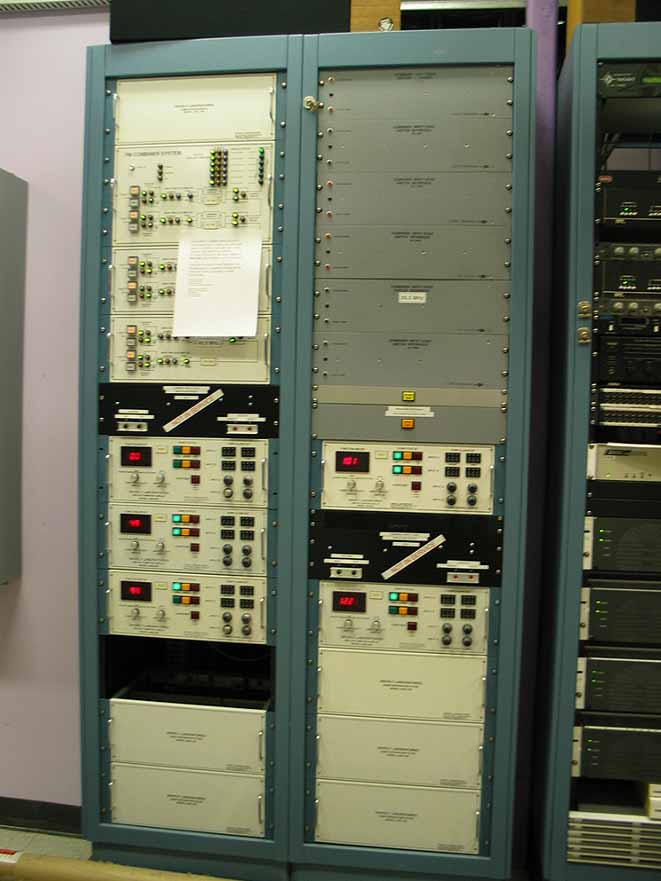 Part of the control matrix for the antenna systems 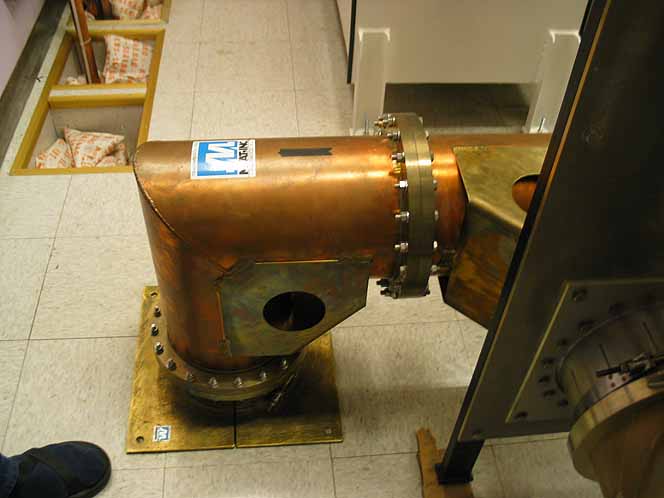 The 9 inch feedline leaves the combiner room, goes to the basement and heads towards the underground tunnel to the base of the tower. 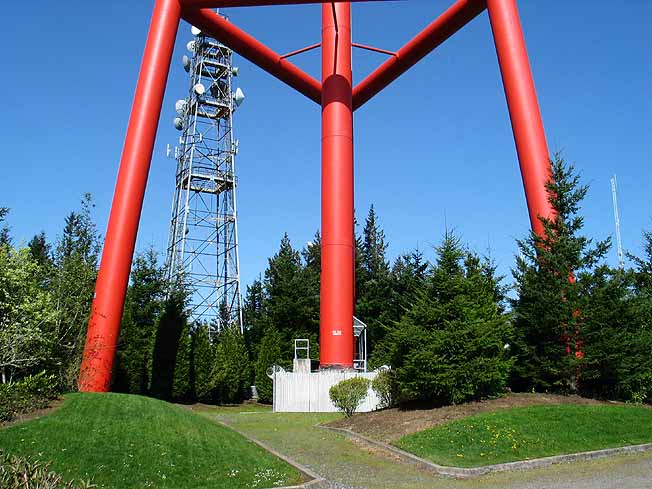 The base of the tower, across the parking area from the transmitter building.
The access tunnel to the center climbing tube is under the ground here. 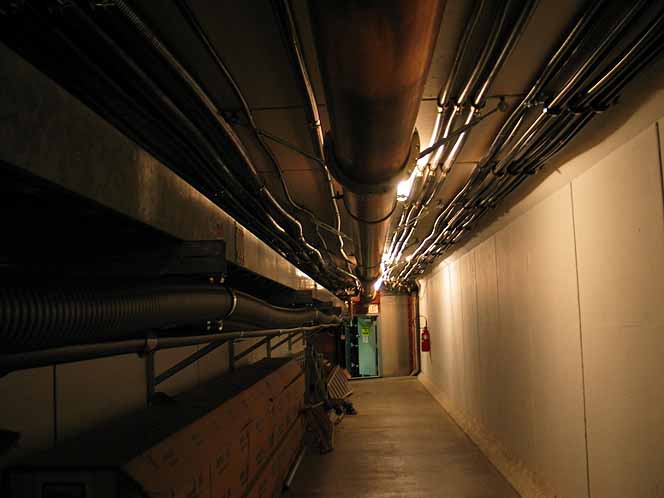 The tunnel access to the base of the Stonehenge tower. 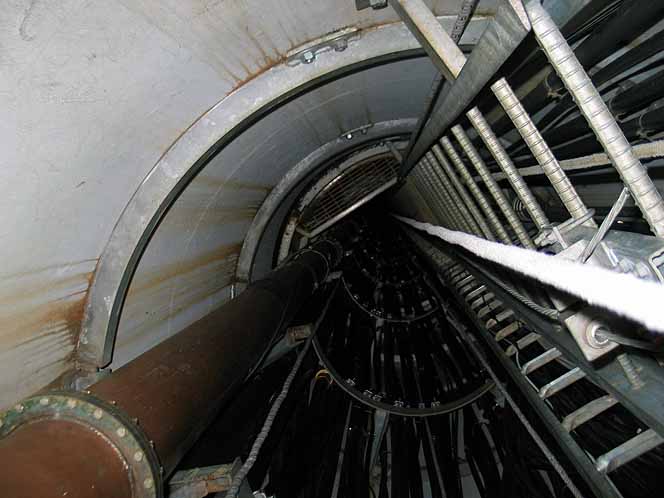 The ladder inside the center tube to the top platform, about 500 feet above. 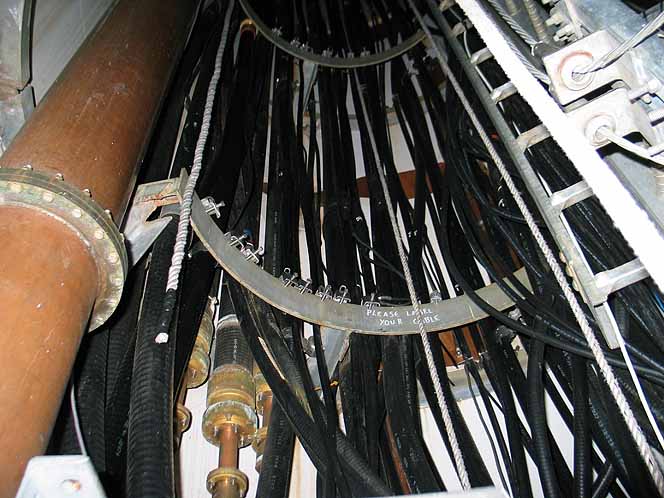 The Stonehenge tower in twilight.

The Council Crest electronic site has a colorful history.

The following commentary was written by Gray Haertig (A.K.A. "Dr. Radio"): 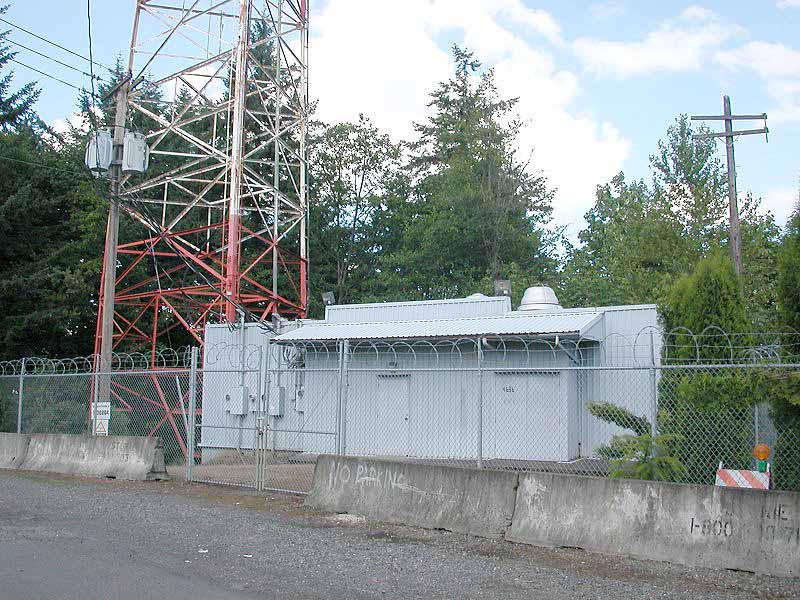 This is what the building looked like when I acquired it. Note the listing utility pole on the right which was the KPRA antenna support structure.

And this is what it looks like today. Note the deck located where the 300' tower used to be. The utility pole is gone - a screw driver jammed in at the base of the pole went clear to the hilt with little effort! 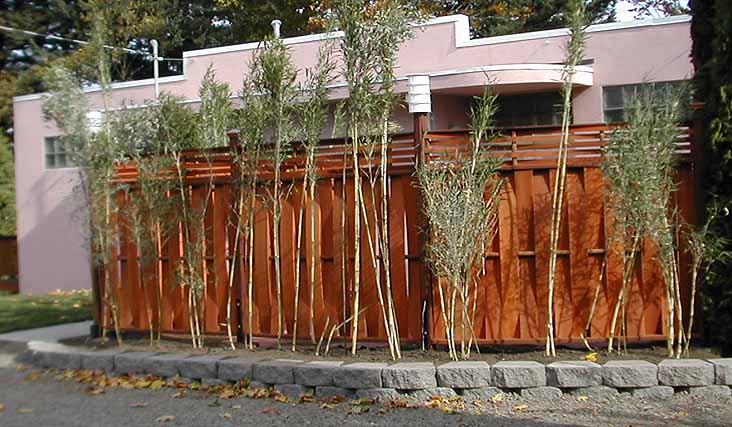 This shot is taken from approximately the same position as the first picture. I had originally planned on using 300 mm code beacons for the post lights, but expediency got in the way of being cool. 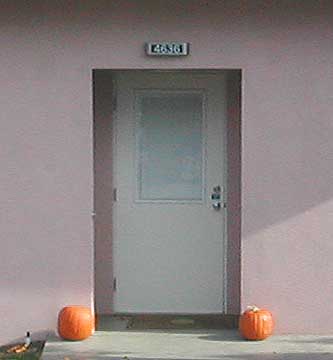 And a close-up of the front door with an "On-Air" light modified to be the address sign.
I have former tenant and former Infinity ACE, Joe E. King, to thank for the repurposed address sign.

This structure started out it's life in 1947 as the transmitter building for KPRA (later KWJJ-FM), Portland's third FM station. The station was dark and the building abandoned by 1949. A wooden utility pole was used for the antenna. In the early 50's experiments were undertaken at the building to determine if it was possible to receive signals from KING-TV, Seattle, for rebroadcast. As far as I know, nothing came of these experiments.

In 1959 it became the transmitter building and studios for one of the incarnations of Channel 27. The building was enlarged and a 300' self-supporting tower erected. The tower had an insulated base to protect the pattern of KPAM-AM, next door. The station was dark and the building again abandoned by 1961.

In the mid 60's it was acquired by Danny Kaye, Frank Sinatra and Lester Smith (Kaye-Smith Broadcasting) for use as a transmitter building for KXL-FM, which it remained until 1998, when Paul Allen acquired KXL (but not the real estate) and moved it to the new KGON (now Stonehenge) Tower located where the old KPAM was. Along the way 5 other stations, including KBOO for which I engineered, shared the building and tower. The other stations moved to the KGON tower between 1990 and the time KXL was sold. The building remained abandoned (and collecting dead birds, rat shit and old transmitters) until 2002, when I acquired it.

As part of my acquisition, Kaye-Smith took down the tower and built me a deck on its foundation. 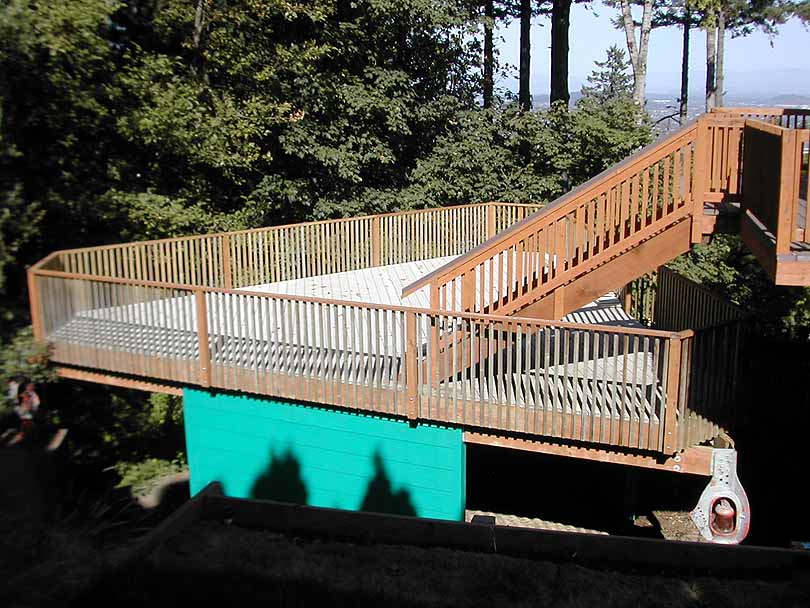 A close up of the deck. Note it is supported using the original tower base insulators. The triangle is about 33' on a side. It (and the house) have views of two stratovolcanoes; the only dormant volcano within the city limits of a city in the US; the third largest river in the US; and the second longest north-flowing river in the world. It also sees most of the east side of Portland. 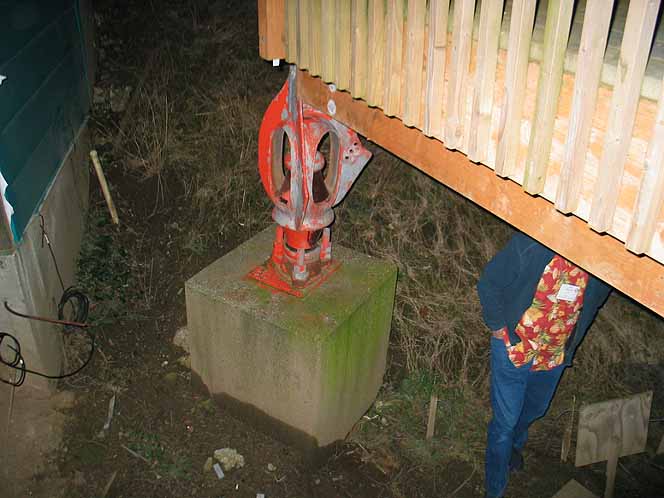 The insulators are very big! 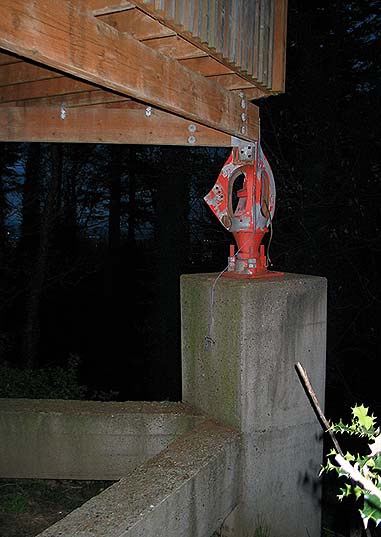 At the same time I acquired the KXL XMTR building, I acquired the residence immediately to the south. I am in the process of remodeling it and will live there when it is done.

Kaye-Smith had bought it for studios, but the City wouldn't let them locate the studio in a residential area. The house was built by an eccentric consulting radio engineer named Harold Singleton. He was instrumental in the design and construction of the first AM DA in the NW, KGW, 620 kHz. He also designed and built the original FM antenna for KRVM, Eugene, the first NCE-FM in Oregon. What is, I believe, the first FM in Oregon, but is definitely the oldest surviving FM in Oregon, is in the building next door to the south that now is the transmitter building serving the Stonehenge tower.

KBOO's transmitter was in the garage of the house for the first 8 years of its life, and I spent a lot of time there trying to keep it on the air. It is within 40' of elevation of the highest point in the city and (once I finish doing some tree trimming) commands a spectacular view of the City, the river and Mt. Hood, Mt. St. Helens, Mt. Addams, and on a clear day, glimpses of Mt. Rainier and Mt. Jefferson.

Harold built the house in 1952 using material he salvaged from the Vanport flood of 1948. The column line in the basement down the center of the house is made of 3" solid steel posts that were originally legs from the KGW east tower, which was knocked down by a floating house during the flood. 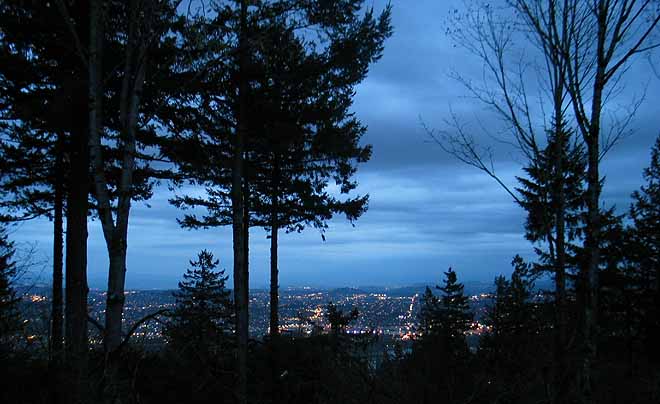 The lights of Portland from the deck. 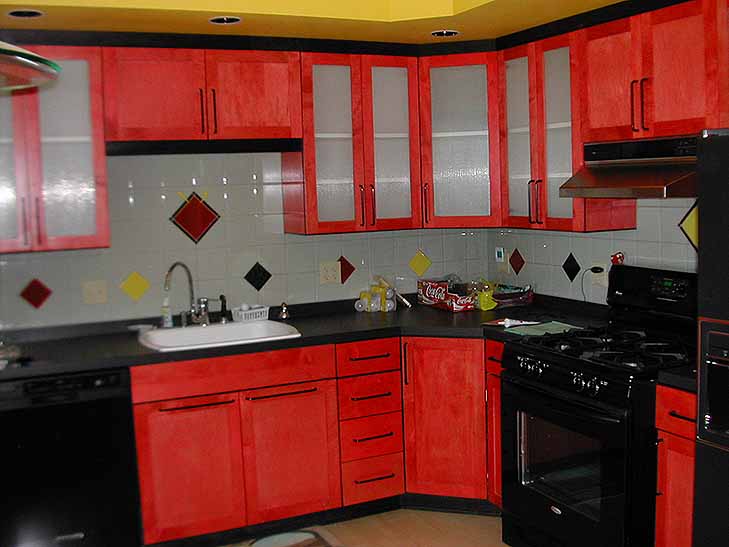 A shot of the kitchen - note those radio lightning bolts above the sink. The cabinets are aniline dye stained maple.

Thanks to Gray Haertig for providing many of the pictures and the story!