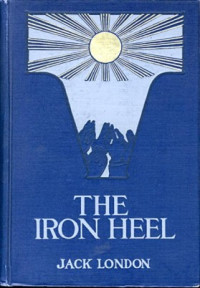 After last November's election, magazines and websites offered any number of articles and listicles with titles like   "Dystopian Novels That May Soon Become Reality in Trump's America" and "20 Essential Books to Prepare You for What's Next" and  "Dystopian Books Trump Wouldn't Want You to Read."  The earliest work to appear on most of these lists—and a work often described as the earliest of dystopian novels--is  The Iron Heel, by Jack London, published in 1908.

Probably London’s fullest fictional presentation of his socialist views, it’s a book that Leon Trotsky, some thirty years later, called a “prophetic vision” of “fascism, of its economy, of its governmental technique, its political psychology. . . . Jack London foresaw and described the fascist regime as the inevitable result of the defeat of the proletarian revolution.” The book has its flaws, as Trotsky acknowledged, though I would include that sense of inevitability as one of them. Still, it’s a compelling depiction of the workings of capitalism.

The middle-class female narrator speaks in the sentimental rhetoric of melodrama, a kind of appeal that has historically proved effective in moving Americans on political issues, most famously in Harriet Beecher Stowe’s anti-slavery novel Uncle Tom’s Cabin. But Avis Everhard focuses her narrative on a working-class hero devoted to the rational appeal to material fact.

When Avis Cunningham meets Ernest Everhard, he tells her that her dress is stained with blood, and then goes on to introduce her to the bleeding workers whose unrecompensed injuries, as well as their more figurative lifeblood, has gone to swell the stock dividends that have paid for Avis’s dress. The injuries are unrecompensed because although workers can sue for damages, the other workers won’t risk their own jobs by honest testimony, reporters know editors won’t publish stories unfriendly to their advertisers and investors, and the judge and the corporate lawyer belong to the same club. The need to feed their children keeps workers bound to the industrial machine by their heart strings, but some are bound so that they are on top of the machine, and the aristocratic class believes that they are in the right.

They believe this despite having no good explanation for the miseries of capitalism. When Ernest challenges a group of oligarchs to defend capitalism’s bad management of a world with both massive productive forces and massive poverty, he gets no satisfactory answer other than the response that will ultimately come in the form of a bullet.

The socialists do first win at the ballot—back in the days before widespread purging of voter rolls and electronic voting machines—but they’re framed for a bombing, and the whole socialist congressional delegation arrested. So the revolutionists move underground, spying on the oligarchs as they are spied upon.

The second half of the novel—once Avis Everhard’s political education is complete, her marriage consummated figuratively as well as literally—consists in the story of a failed revolt against the machine, the blood of the workers become literal blood in the streets.

One might read the failure of that revolt as a result of its vanguardist strategies.  The revolutionists want to save and to manipulate those they call "the people of the abyss," the "labor-serfs" or lumpenproletariat; but they do not identify themselves with those workers or include them as agents of the revolution.

Yet the fascist dystopia of The Iron Heel is wrapped inside a socialist utopia—the manuscript Avis writes has been published some 700 years after her death, and features a foreword and footnotes written in year 419 of the Brotherhood of Man.

It’s not surprising that the future socialist utopia is called the Brotherhood of Man, since despite the presence of Avis and other women in the ranks of the revolutionaries, the book doesn’t register the possibility of women’s emancipation, nor the possibility that there might be anything other than the class system from which to be liberated.

And as some readers have noted, it’s probably just as well, given London’s record on questions of race, that there’s little about that in the book, though it is very strange to think of a socialist revolution in the US that doesn’t have something to do with race.

London's social Darwinist leanings emerge in the novel through Ernest Everhard's Ubermensch qualities, and help explain the book's sometime popularity with readers on the right.  But that weird convergence of left and right resonates today with the fascist creep against which we do well to be alert.

Moreover, for leftish readers today, The Iron Heel offers not only a sharp diagnosis of capitalism but also a  salutary reminder of the struggles of the past and of how close the possibility of socialist change has sometimes seemed in the US.

As Naomi Klein has reminded us, we haven’t lacked for ideas— “universal healthcare; living wages; cooperatives; participatory democracy; public services that are accountable to the people who use them; food, medicine and shelter as a human right. These aren’t new ideas. They’re enshrined in the UN Charter.”

Nor have we lacked resources. Apple, incorporated, has a market capitalization of close to 600 billion dollars (that's billion with a B), and ExxonMobil is on target to make about 100 Billion in gross profit this year.

As Klein observes, "We can tax the polluters and the casino capitalists to pay for alternative energy development and a global social safety net.”

Nor is the problem political will or coordination among political leaders.

In The Iron Heel, the character who most believes that the problem is simple ignorance is a clergyman who is shocked to learn, under Ernest’s tutelage, the extent of the suffering of the poor. But his wealthy congregation is shocked at the turn his sermons then take, and he ultimately loses his job, his home, and his freedom, when he’s declared insane and committed.

As Klein says, “elites don’t make justice because we ask them to nicely and appealingly. They do it when the alternative to justice is worse. And that is what happened all those years ago when the income gap began to close. That was the motivation behind the New Deal and the Marshall Plan. Communism spreading around the world, that was the fear. Capitalism . . . needed to soften its edges.”

As Frederick Douglass knew, “Power concedes nothing without a demand. It never did and it never will.”