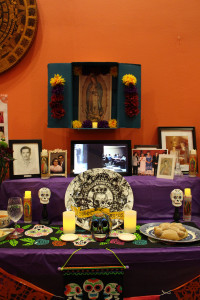 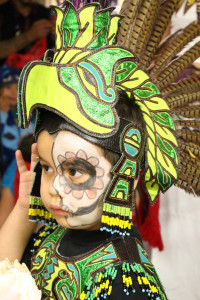 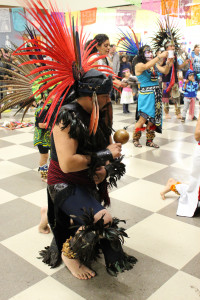 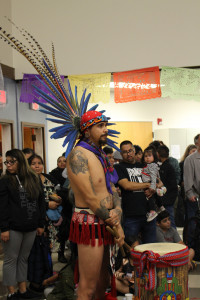 Natalia Messer is a freelance journalist visiting KBOO from Chile, who will be reporting from the Portland area until November 10th. Her most recent work focuses on the struggles of the Mapuche people in Chile, though she has reported from around the world, including Germany. Her work on the Mapuche can be found in Deutsche Welle, and Radio Ambulante.

On November 1, she attended the Dia de los Muertos, or Day of the Dead, celebration in Cornelius, OR, and captured some pictures that tell the story of a holiday which is often misrepresented in US media and culture.

The Day of the Dead in Cornelius City

The Day of the Dead is a festive holiday celebrated in Mexico between October 31st and November 2nd. On this colorful holiday, Mexicans families remember and honor their deceased loved ones. In Mexico, most of people visit cemeteries, decorate the graves and spend time there, in the presence of their deceased friends and family members.

The families prepare decorated altars with sugar skulls, often with the person's name inscribed on the top, and some food, such as beans and corn. The belief behind this holiday is that spirits came back to the world of the living just for one day of the year to be with their families.

Yellow, white, red, purple and so more! Day of the Dead is known for its vibrant colors, symbols and also painted faces. This photo is part of a Day of the Dead’s celebration in Cornelius city.

The skulls have become popular symbols and are created to resemble the deceased. Family, friends, and neighbors consume later these sugar skulls when the spirits have gone.

The bread of the Dead

“Pan de Muertos” is typical bread made especially for the season with cempasuchil (marigolds), which flower at this time of year and provide a special smell to the decorated altar.

Day of the Dead and Halloween are based on the idea that the spirits return at that time of the year. However, these holidays are distinct. In the first, spirits are welcomed as part of the family, whereas in the second celebration the spirits are malevolent.

On this holiday there is also a belief about the little angels (called in Spanish angelitos), spirits of babies and children who have died. It is said that these “angelitos” arrive on October 31st at midnight, spend an entire day with their families and then leave this world.

Dancing with the Dead

During the ceremony people perform traditional dances. The dancers are usually dressed in indigenous get ups, such as headdresses and body paint.

Feathers of many colors are part of this old costume indigenous tradition.

In the ceremony the dancers play music. Some dancers are playing instruments that accompany it, like drums and flutes.

A girl is burning an aromatic resin called Copal, which was used in the past by the cultures of pre-Columbian Mesoamerica. Copal is still used by indigenous peoples of Mexico and Central America as incense, during sacred ceremonies.