Volunteer Spotlight on Will Mustoe 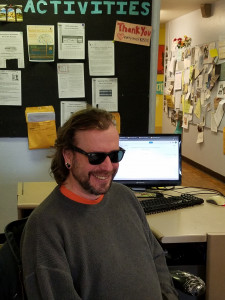 Dear Members of the KBOO Community,

It is with a heavy heart that I tell you that our volunteer, Will Mustoe, passed away suddenly last week.  Will had a huge presence at the station, by providing countless hours at the front desk over the last 8 years.  He touched many people with his warmth and wonderful sense of humor.  Will had a rare gift for connecting with so many people, and making sure folks felt welcome and cared for at the station.

A year ago, Will was the subject of our Volunteer Spotlight, which highlights the amazing volunteers that make KBOO what it is. As a tribute to Will, I am reposting this blog from March 2017.

with love and appreciation,

Volunteer Coordinator Ani Haines brings you this regular blog to highlight the work and participation of people in KBOO's volunteer community.

Will Mustoe is a regular volunteer at KBOO's front desk.  He has lost most of his vision as an adult, and came to KBOO to see if he could find something that he felt comfortable doing, while making a positive impact on his community. The short answer was, of course! Will has contributed countless hours staffing the front desk over the last seven years, and helps with special events and pitching during the membership drives.  There was also one music special on a Christmas morning a few years back that was, well, an amazing display of knowledge in the novelty Christmas music genre...

I caught up with Will recently, and asked him to talk a little about his volunteering with KBOO. Here's what he had to say:

1. Please introduce yourself to the KBOO Community-- who are you, and what are you passionate about?

My name is Will Mustoe, and I’ve been a volunteer at KBOO for about 7 years. I’m passionate about freedom of speech and the access to information that isn’t widely available. And also I really believe in any broadcast entity that doesn’t use advertising, I think that’s one of the great things about KBOO.

I’m sort of passionate about life now, I’ve re-invented myself again, and I’m enjoying that.

2. What's your favorite thing to do on a day with no commitments?

Work out to loud music.

3. What brought you to KBOO?

I wanted to feel useful. I wanted to help with an organization that I believed in and that I’ve listened to for years.

4. What have you done at KBOO?

I’ve done pledge drive, helped out on the air. And I’ve been working at the front desk for a two days a week for about 7 years now.

5. What have you learned?

A lot! I’ve learned about people and the different lives they lead. I’ve learned that I can be useful despite my disability. I have learned that there is a place for somebody who’s a bit odd, which is nice because I get to hang out with other odd people—I’ve heard this place referred to the The Island of Misfit Toys. I’ve learned that life can go on, even though you can become disabled, you can still have a good and healthy life.

6. Are there other things you'd like to do at KBOO in the future?

7. What's your favorite moment at KBOO? Any highlights?

Recently there was one where Joe Uris was being somewhat criticized for using the words “crazy” or “clinically insane”—he was throwing these words around about Donald Trump, and somebody complained about that because it stigmatizes mental illness. I pointed out to Joe that I didn’t have a problem with him using that language, despite the fact I’ve been in three psychiatric units. He turned around and said, “Of course you’ve been in psychiatric units, just look at you!” I just loved that moment, it’s like, “that’s rude—but pretty damned funny….”

8. How does KBOO help your family/community/etc/?

KBOO effects the whole of Portland, and that’s one of the things I love about it. It calls itself a community radio station, but it really is a part of the community. It’s not just one more station with witless blather and the same old crappy music. When I tell people I work at KBOO outside of here, most people have heard of it and have some sort of relationship to it, whether they have just listened to it or knowing somebody who has volunteered here, or having a friend who does a show. It’s a great thing to be a part of something much larger than myself, and that is genuinely important to Portland.

9. Why is KBOO important?

Basically because it is a supporter of free speech—there’s all sorts of different opinions on KBOO that you don’t hear anywhere else, and as much of a cliché as it sounds, you can hear music that you don’t hear anywhere else. When there is something boring on the radio late at night, I’ll change to KBOO from NPR, and I will listen to the music transfixed, just trying to work out what it is, and I love that!

10. What else do you want people to know about you?