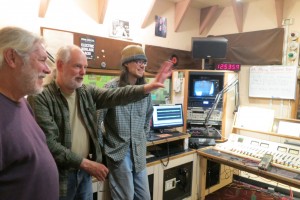 It had been years since this kind of in depth maintenance had been performed. This gave us an opportunity to access the overall condition of the air room console modules and other broadcast equipment in the room. Prior to shutting down the air room, the Production 1 studio was outfitted with an Airtools delay to provide an indecency  “Dump” button and all audio routing was switched so that Production 1 was now the Air Room. Switching to Production 1 was a smooth transition and inaudible on the air.

Four show hosts were able to produce their programs normally with minimal impact to operations. Basic cleaning of the room was the first priority, with vacuum and facemask in hand. The dog hair is gone. All surfaces were wiped down and tons of grunge (normally used for rock music) was removed. CD Three was replaced. The two turntables received new styli. The console modules were removed one at a time, then cleaned and reassembled. Test tones were sent through the modules to calibrate audio levels at different frequencies. This resulted in a smoother, more balanced audio chain going out to our transmitter.

We were able to assess the condition of the console which has been in continuous operation 24/7 for two decades. We identified several components that need to be replaced such as capacitors which dry out and fail over time. These will be replaced in the coming year.

The entire operation took 10 hours and we had the Air Studio reassembled at 5 AM when we switched from Production 1 back to our normal Air Studio. Thanks to all the cooperative programmers that were displaced during this operation. Kudos to the Engineering Workgroup for working so diligently till 5AM. Special thanks to Mike Johnson for his technical support. It was a great evening and we all had fun. Now the station sounds better on the air.
Topic tags:
Engineering