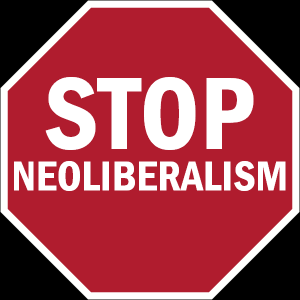 On the defunding of Higher Education and the struggles at PSU

Henry Giroux reminds us what neoliberalism is about: it tells us that

Government is the problem; Society is a fiction; Sovereignty is market-driven; Deregulation and commodification are vehicles for freedom; and Higher education should serve corporate interests rather than the public good. In addition, the yardstick of profit has become the only viable measure of the good life, while civic engagement and public spheres devoted to the common good are viewed by many politicians and their publics as either a hindrance to the goals of a market-driven society or alibis for government inefficiency and waste.

Obviously there are some problems with those views:

Missing from neoliberal market societies are those public spheres - from public and higher education to the mainstream media and digital screen culture - where people can develop what might be called the civic imagination. For example, in the last few decades, we have seen market mentalities attempt to strip education of its public values, critical content and civic responsibilities. . . . Tied largely to instrumental ideologies and measurable paradigms, many institutions of higher education are now committed almost exclusively to economic goals, such as preparing students for the workforce. . . . Many universities have not only strayed from their democratic mission, they also seem immune to the plight of students who face a harsh new world of high unemployment, the prospect of downward mobility and debilitating debt. . . .

Central to this neoliberal view of higher education in the United States and United Kingdom is a market-driven paradigm that seeks to eliminate tenure, turn the humanities into a job preparation service, and transform most faculty into an army of temporary subaltern labor....

There is little talk in this view of higher education about the history and value of shared governance between faculty and administrators, nor of educating students as critical citizens rather than potential employees of Walmart. There are few attempts to affirm faculty as scholars and public intellectuals who have both a measure of autonomy and power. Instead, faculty members are increasingly defined less as intellectuals than as technicians and grant writers....

In the United States and increasingly in Canada, many of the problems in higher education can be linked to diminished funding, the domination of universities by market mechanisms, the rise of for-profit colleges, the intrusion of the national security state, and the diminished role of faculty in governing the university, all of which both contradict the culture and democratic value of higher education and make a mockery of the very meaning and mission of the university as a democratic public sphere. Decreased financial support for higher education stands in sharp contrast to increased support for tax benefits for the rich, big banks, the military and mega corporations.

Some of these features are on view in the current struggles at Portland State University.

This is while most faculty salaries declined in real dollars.

Yet in the last year the administration has cancelled classes and tried to cut programs, and they have also demanded across the board cuts from remaining academic units.

But pushback from students and faculty has already succeeded in getting the administration to revise its projected supposed shortfall of funds by over ten million dollars, and the remaining needed cuts could be more than addressed by rolling back administrative salary and benefits to 2011 levels.  Last fall the administration said that PSU must slash academic budgets because it faced a 15 million dollar structural deficit. Faculty and academic professionals stood up for academic and student-oriented priorities; they questioned the case for academic cuts; they called for access to an All Funds, line-item budget; they came out for rallies & tabling on campus. The administration retreated, halving the amount of cuts they demanded to seven and a half million dollars, and more recently leaving their call at three point seven five million dollars in cuts to academic programs.

As the PSU faculty union points out, "Only continued pressure will shift the PSU budget toward academic investments, and away from excessive administration, real estate and "auxiliary" spending."

The Portland State University Student Union has a series of events scheduled for Student Power Week 2014. Monday February 17th at 5:30 organizer and activist Lisa Fithian will be at Parkway North, in the Smith Memorial Student Union. Tuesday February 18th at 5:30, Chilean Student Unionists will be at the Multicultural Resource Center at Smith Center. Check their website for more events, and don't forget that Thursday February 20th there will be rally to support Portland Public Schools teachers at 3pm at Pioneer Courthouse Square.