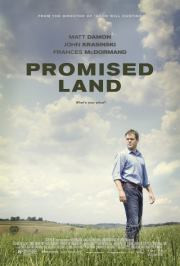 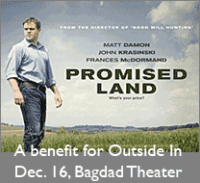 You are invited to a special benefit screening of Gus Van Sant's newest film, Promised Land!

Director Gus Van Sant will launch a special screening of his newest film Promised Land in Portland Dec. 16 - and you are invited!

All proceeds from the event will benefit Outside In.

The film reunites Van Sant with actor Matt Damon. Their past work together included Good Will Hunting.

Matt Damon portrays a corporate salesman whose journey from farm boy to big-time player takes an unexpected detour when he lands in a small town. Amid the prospect of drilling rights offering much-needed economic relief, he grapples with a surprising array of both open hearts and closed doors.

Van Sant says Promised Land "tackles big issues but with a lot of humor and humility. It's a story about real people, with all their foibles as well as their greatness."

Gus has been a long time friend and supporter of Outside In and is thrilled to have the opportunity again to support the agency with a benefit screening.

"Outside In provides a medical clinic as well as services for homeless youth.  The Portland event will raise money for-and awareness of -the needs of these clients," said Kathy Oliver, Executive Director.

The screening will be held at 7:30 p.m. December 16 at McMenamins Bagdad Theater, 3702 SE Hawthorne Blvd. in Portland.  A private reception with Gus Van Sant will be held prior to the screening for sponsors.

In Promised Land, Matt Damon stars as Steve Butler, a corporate salesman whose journey from farm boy to big-time player takes an unexpected detour when he lands in a small town, where he grapples with a surprising array of both open hearts and closed doors. Gus Van Sant (MILK, Good Will Hunting, My Own Private Idaho) helms the film from an original screenplay written by John Krasinski & Matt Damon, from a story by Dave Eggers.

Promised Land unfolds as Steve has been dispatched to the rural town of McKinley with his sales partner, Sue Thomason (Academy Award winner Frances McDormand). The town has been hit hard by the economic decline of recent years, and the two consummate sales executives see McKinley's citizens as likely to accept their company's offer — for drilling rights to their properties — as much-needed relief. Complication arise professionally, by calls for community-wide consideration of the offer by respected schoolteacher Frank Yates (Academy Award nominee Hal Holbrook) and personally by Steve's encounter with Alice (Rosemarie DeWitt). With the arrival of a slick environmentalist activist Dustin Noble (John Krasinski), the personal and professional stakes rise to the boiling point.

Promised Land keenly distills questions of how American values have evolved. These explorations come in part through a small town's decisions when a natural gas company seeks to extract gas from shale rock formations through the process known as hydraulic fracturing, or "fracking."