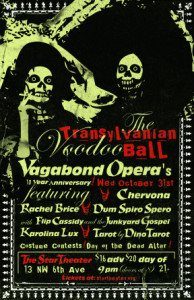 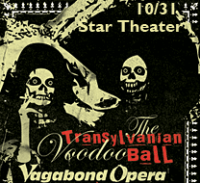 Vagabond Opera raises the dead in style at their sixth annual Halloween bash!

Vagabond Opera raises the dead in style at their sixth annual Halloween bash! The event will ALSO mark the TEN YEAR ANNIVERSARY of the band! Held in the vintage restored Star Theater (Portland’s historic 1911 silent film and Burlesque venue) Vagabond Opera presents a stunning night of haunting music, dance, ritual and art for honoring our ancestors and those who have passed. Whether you want to dance, party or pray this night is for you!

The evening will encourage audience participation with an interactive Day of the Dead altar, psychic Dino tarot readings, Lulu’s Chocolates and more for a truly eclectic and spell binding evening. Costumes highly encouraged!

Mixing together the taste and passion of the best Gypsy, Russian, Ukrainian, Klezmer and Balkan musical traditions, Chervona brings the fire of Eastern European carnivals to the land of America. With a shining brass section, drums, bass, guitar, accordion and enthusiastic vocals, they seek to capture the soul of the traditional old world sounds and blend with new interpretations. The band started in Nov 2006, and has played on the streets, and at festivals all over the West Coast including special appearances with world famous Manu Chao and Gogol Bordello. chervona.com

Rachel Brice is a world renowned contemporary Tribal Fusion Style Belly Dancer. She is the artistic director and choreographer for The Indigo Belly Dance Company and a frequent performer with the Bellydance Superstars. In June 2011 she opened her own dance studio in Portland, OR, called ‘Datura’. rachelbrice.com