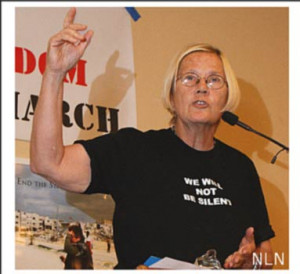 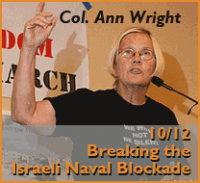 Col. Ann Wright will report on Gaza's Ark, an international effort to focus attention on Gaza

Veterans For Peace Invites you to hear Col. Ann Wright report on Gaza's Ark, an international effort to focus attention on the inhumane conditions in Gaza and pressure the U.S. and Israeli governments to end their illegal blockade.

Colonel Ann Wright is a former United States Army colonel and a U.S. diplomat who resigned in opposition to the Iraq War; one of three State Department officials to publicly resign in protest of the March 2003 invasion of Iraq. She was on the May 2010 Freedom Flotilla I, attacked by the Israeli military, and was an organizer for the US Boat to Gaza in the 2011 Freedom Flotilla II.

When Col Wright resigned from the State Department in March 2003 she wrote: “I have served my country for almost thirty years in the some of the most isolated and dangerous parts of the world. I want to continue to serve America. However, I do not believe in the policies of this Administration and cannot defend or implement them. It is with heavy heart that I must end my service to America and therefore resign due to the Administration's policies.” Ann has continues to serve her country as a warrior for peace, standing up for the victims of violent aggression, in war, in the military and in our homes.

Gaza’s Ark is a new initiative to challenge the illegal and inhumane Israeli blockade of Gaza, the only Mediterranean port closed to shipping. The Canadian Boat to Gaza, in cooperation with internationals in the US, Australia and other countries, will build a boat in Gaza, using existing resources. A crew of internationals and Palestinians will sail it out of Gaza carrying Palestinian products to fulfill trade deals with international buyers.

Send a check made out to Nonviolence International to:
(Important: write “Gaza’s Ark” in the memo field)