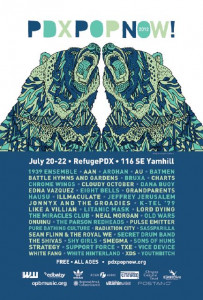 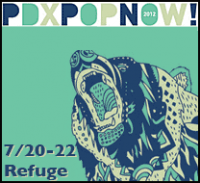 KBOO is a proud media partner for PDX Pop Now! 2012

The Schedule has been announced!

In 2004, a group of members from the PDX-POP listserv organized the first PDX Pop Now! music festival to “make a big deal” out of Portland’s vibrant music community.

The early, conscious decisions of these organizers helped shape the festival, and now shape our organization. In dedication to the large number of underage music fans, the festival is an all-ages affair. To this tune, the first installment was held at Meow Meow, a now-defunct, all-ages music venue on Portland’s industrial east side.

To prevent any barriers to entry, we also make similar commitments to keep the festival free of charge and located centrally—at venues close to public transportation routes. Both are heavily credited for growing the festival each year, and bringing in new voices to the music scene.

The all-access philosophy is furthered through a democratic booking process that empowers fans with the right to nominate which artists best represent Portland music. After collecting nominations, the board hand-picks a 15 member booking committee that best represents a cross-section of the Portland music scene—including a variety of ages and backgrounds. This committee then takes ownership of what’s to become the city’s festival by selecting their favorites from the “equal-opportunity” list of nominees.

The PDX Pop Now! festival established itself as a spin-off from the PDX-POP listserv, and continues to serve as our signature event to this day. The multi-day festival brings scores of Portland artists and residents together in their own, urban backyard.

Every July, the festival, which showcases up to 50 of Portland’s finest bands, draws audiences in the thousands. Since 2004, the fests have collectively stimulated interest, expanded participation, introduced new bands into the fold, inspired collaborations and represented every goal related to Portland music that our organization set out to accomplish.