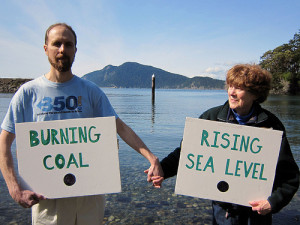 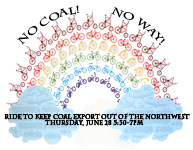 KBOO is a proud sponsor of the Portland Assembly Against Coal Exports, and the Pedalpalooza Ride to the PACE.

The Assembly will provide a location for concerned citizens to gather and discuss community based responses to the six proposed coal export terminals for the Northwest. If built, two of these terminals could bring as many as 16 uncovered coal trains per day through Portland exposing residents to toxic coal dust and fueling the climate crisis.

Coal is toxic at every stage: mining, transport, export and burning. Our heath, economy, quality of life, and climate are all at risk if any coastal port constructs a coal export terminal. The 150 million tons of coal proposed for export across the Northwest annually would make our region the largest coal handling region in the nation and force our neighborhoods to endure decades of toxic pollution with few, if any, local benefits.

Community-based solutions to stop coal export will be the topic of the evening. The Portland Assembly Against Coal Exports will provide opportunities to learn about coal export proposals, listen and share ideas for stopping coal, and acknowledge and build on the exciting work that residents have already begun to stop coal export.

This event is sponsored by Community Alliance Against Coal, Columbia Riverkeeper and KBOO Community Radio Pedalpalooza Ride to the Assembly

A Pedalpalooza bike ride to the Assembly will depart from 1821 SE Ankeny at 5:30PM.
Read more about the No Coal! No Way! Let’s Ride Pedalpalooza ride (or see below)

Ride and learn how coal export threatens PDX specifically and the NW overall. Community forum about coal exports will follow at the ride’s destination in St. Johns.

“No Coal” spoke cards for all riders! 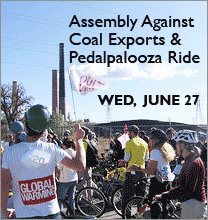