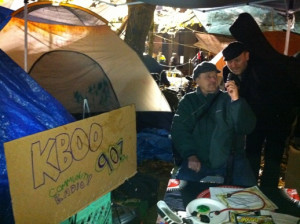 When the Occupy Portland encampment began on October 6th, we at KBOO knew that we would be very involved in reporting on the movement – the issues, the constituency involved, and the bottom-up civic activism displayed by the camp’s ad-hoc organizers all spoke directly to KBOO’s long-established values of peace, justice, democracy, human rights, multiculturalism, freedom of expression and social change.

But I don’t think any of us realized at the time just how entrenched our reporting would become. 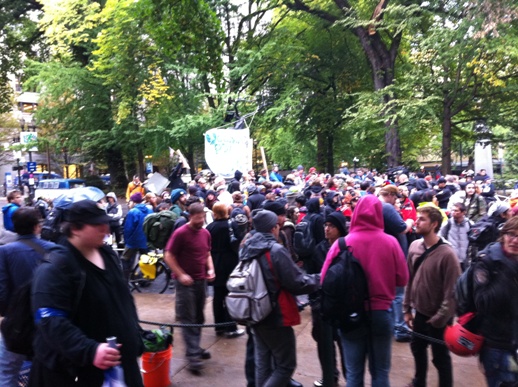 After the march that drew 10,000 Portlanders into the streets on October 6th to challenge corporate greed and Wall Street bankers’ wrongdoing, there was a lot of excitement among KBOO volunteers and staff as to what to do next. As Portland’s oldest and most diverse non-commercial radio station (established in 1968), KBOO has long had a history of giving a voice to those trying to bring about social change – from the anti-nuclear sit-ins of the 1980s to the Raging Grannies who would sit in their rocking chairs outside army recruiting centers to oppose the war in Iraq, KBOO has always been there with our microphones to provide a megaphone for the people involved in trying to bring about peace and justice by putting themselves on the line.

We had a number of volunteer field recorders who began going to the camp every day after it was established, 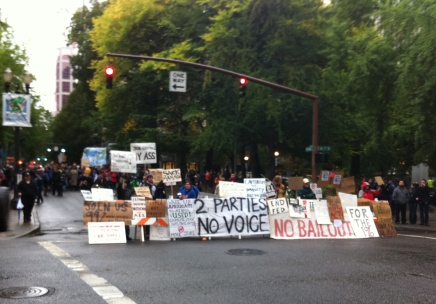 and rush back to the station to edit reports for the Evening News. But we soon realized this was inefficient, and on October 17th, we set up a ‘mobile studio’ on site. KBOO’s Chief Engineer, and I, the Evening News Director, brought down a table, chairs, canopy tent, a small mixer, headsets, microphones, a 4G modem and two laptops, and began webcasting live from the encampment every day. KBOO volunteer hosts stepped up to do interviews, announcements and reports, and others signed up for shifts to stay overnight in the ‘KBOO tent’ and keep an eye on the equipment. We also did a number of live broadcasts on the air, including during our talk radio segment from 8 – 9 am, which received rave reviews from our listeners. 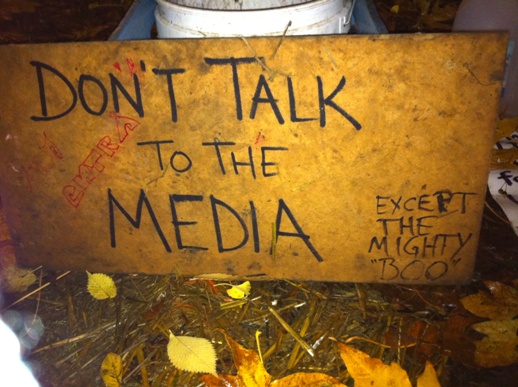 addicts, with homeless youth and vets brushing arms (and sleeping bags) with community organizers on a daily basis. But while the local cable news shows focused on the negative aspects of this fact -- the petty crime, mental health issues and drug problems that go along with homelessness in general – KBOO looked at the larger picture: the fact that within a couple weeks of organizing, the camp had established a kitchen serving three wholesome and hearty meals a day (and often a fourth meal at midnight!), a medical center serving the needs of campers and passers-by alike, a lending library with at least a thousand books sorted and organized by category and workshops every day, a kids’ camp with activities for families and a small playground, a safety committee and processes to respond to unsafe situations, an info booth staffed by volunteers 24-7, an art tent, a coffeehouse, a live video stream on the internet, and a democratic decision making process that, in my viewing of the General Assembly meetings, was far more effective and inclusive than Congress. All of this for free, with donated time and money, and 100% volunteer-driven. In short, 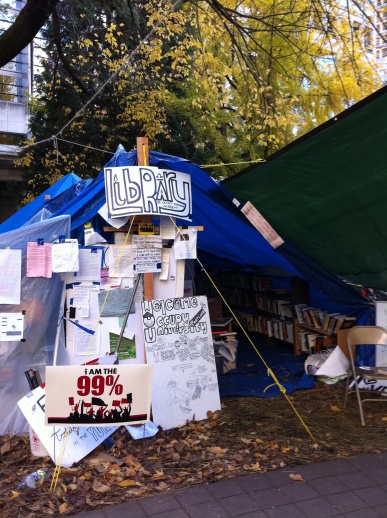 the camp was demonstrating through example how society could be organized if resources were re-organized to serve the needs of the people, instead of, as they put it, ‘funneling money from the pockets of the poor and working class to the bank accounts of the rich’.

Every day we opened our microphones to those in the camp, and heard some incredible stories of hardship and courage: the young woman who arrived at the camp with two kids from a period of homelessness, penniless and hungry, and were given a donated tent and a place to stay and stabilize their lives (“This camp has been like a dream come true for us”, she told us); the elderly camper who decided to engage in a hunger strike for economic justice, and called on all the Occupy encampments worldwide to have a conversation using new technology and a worldwide ‘General Assembly’ to reshape society; the homeless man in a wheelchair who had been sleeping on the sidewalk with no medical support before the camp, and was able to get help with his ongoing medical issues from volunteer doctors and nurses on site; the family that lost their home in foreclosure, and were about to lose their rented apartment too, since the dad’s unemployment checks had just run out……the stories were incredible and moving, and so many people used the opportunity of KBOO’s presence at the camp to tell their stories of how the economy had impacted their lives. For many of these people, the Occupy Portland encampment was a godsend, giving them a chance to breathe and not worry about food and shelter for a little while, and begin to focus on getting their lives back.

As the threat of eviction of the camp by the city became imminent, our ‘mobile studio’ became even more mobile 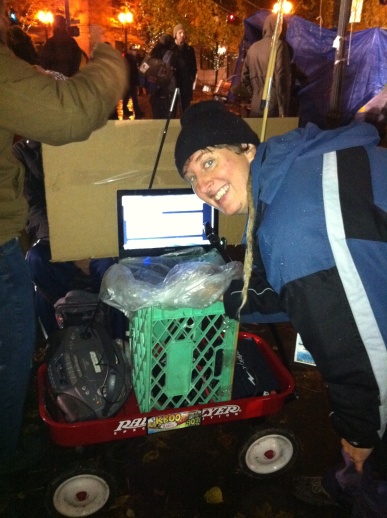 – from a tent with a table to a little red wagon and a milk crate, powered off a 12-volt battery instead of a generator, we began walking through the camp and reporting on the thousands of people that arrived on Saturday November 12th to support the camp and try to hold off an eviction that the Mayor had said would take place at 12:01 on Sunday the 13th. When that deadline came and went with no eviction, and the numbers of people there having swelled to over 5,000, we lost even our 12-volt battery power, and had to resort to a backpack with a laptop running off its own battery. We kept going throughout the night, as I ran back and forth between the radio station and the camp, charging laptops and switching them out as needed.

The persistence and steadfastness of the people in this movement became clear as, around 12 hours after the supposed ‘deadline’, around noon on Sunday, the few hundred people who remained (most of whom had been without sleep for 30 hours or more) were pushed out of the park by hundreds of riot police. Around two dozen people remained in lockdown, determined to defend this temporary autonomous zone they had created. We broke into our on-air Spanish programming on KBOO throughout Sunday afternoon to provide live reports of this action, and a thousand more people from around the city streamed in to bear witness to the destruction of the camp. After a three-hour standoff at the edge of the camp, now blocked off by riot police, the campers marched to the only nearby semi-public space available: Pioneer Courthouse Square – a block unofficially known as ‘Portland’s living room’, despite the fact that it is now privately owned.

There, a large General Assembly meeting of around 1500 people took place to determine what to do next. People evicted from the camp with no place to go were offered refuge at a local church basement for a couple days, and protesters debated whether to try to re-take the parks or look for an alternative location – or whether it would be better to re-focus on the issues of economic disparity through other means and actions than trying to maintain a camp. 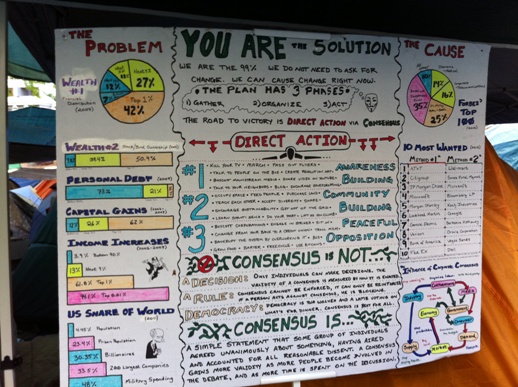 Although no real consensus was reached, and more meetings are planned, no matter what the movement decides to do next, KBOO radio will be there to amplify the ‘people’s megaphone’ and share the stories of the disenfranchised and dispossessed who are now working together on a vision for a better world.

<p>This coverage has been so inspiring! Any time I wanted to remind myself of the heart of this movement&nbsp;I could go to the link and hear the voices of the people themselves. Thank You all who are part of this coverage. I am so proud to be part of the Kboo community.</p>

<p>While I have been in Viet Nam I have&nbsp;heard the best information on the movement from KBOO. The net has been my lifeline to KBOO and Portland.</p>

I listened every night. The truth is whenever people gather for a cause, it attracts the wrong crowd. (The wrong crowd can also be instigators sent to stop the cause.) What would happen if we simply take holiday shopping off of our budgets? Is it wrong to assume THAT message would be heard by Wall Street and the White House? Spending is what's keeping both sides content. Since the unemployment and poverty numbers are so surreal; both entities pay more attention to dollars. Thanks KBOO.