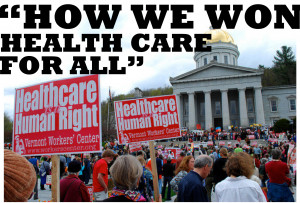 Inspired by Success in Vermont, Grassroots - Meetings Scheduled Throughout Oregon

(Portland OR) Oregon supporters of a universal, single-payer heath care system are looking east for inspiration, bringing Vermont activists to our state to outline how a grassroots movement there resulted in the successful adoption of universal health care legislation last June. Portland is the last stop of an 10 city swing through Oregon by two members of the Vermont Workers Center, Kate Kanelstein and Sarah Weintraub. They will be joined by representatives from the events’ sponsors, Jobs with Justice and Oregon Single Payer Campaign, as they outline the strategies and tactics that worked in Vermont.

“How We Won Health Care for All” Workshop

Oregon is one of 20 states considering single-payer health care legislation. Its a battle worth ﬁghting as one Oregonian dies each day due to lack of access to health care according to a 2009 Harvard study. The lessons learned from Vermont can inspire Oregon citizens to build from the ground up support for the Affordable Healthcare for All Oregon Act. sponsored by State Rep. Michael Dembrow and State Sen. Chip Shields. It would provide comprehensive, affordable health beneﬁts for every Oregon resident.

More information on Oregon healthcare reform can be found at www.jwjpdx.org and www.singlepayeroregon.org