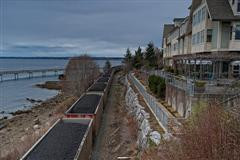 KBOO is a proud media supporter for The Coal Hard Truth

PORTLAND- On Monday November 14th, dozens of Portlanders will gather to learn about the impacts of  coal exports trains on our community.  The Power Past Coal Coalition, a coalition of more than 50 organizations, including the Sierra Club, Climate Solutions, and Columbia Riverkeeper, is sponsoring the event to inform the public of coal export proposals in the Pacific Northwest and their impacts.  The forum comes one week after a similar forum hosted by the coalition in Hood River.

Oregon and Washington made major strides in ending our reliance on coal by setting dates to move our last coal-fired power plants—Boardman and Transalta— off of coal.  In what would be a giant step backward, coal companies are now threatening to export tens of millions of tons of coal through the Pacific Northwest to foreign markets.

The coal export terminals proposed in Coos Bay and St. Helens could draw dozens of coal trains through the Columbia River Gorge and Portland.  Each coal train would be more than 1.5 miles long.  Local residents are concerned about the health, safety, economic, and climate impacts of these projects, including: diesel pollution and coal dust from open rail cars, pollutants which are linked to asthma and lung cancer; the high risk of coal train derailments; noise and property devaluation; and coal trains creating more traffic, blocking emergency vehicles,  and limiting access to neighborhoods and businesses.