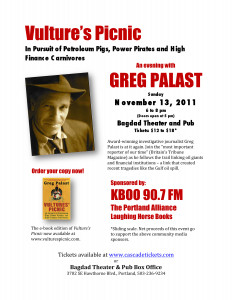 KBOO is a proud benificiary for this Greg Palast Lecture

Portland, OR.  Investigative journalist Greg Palast is offering Portlanders a special pre-release peek at his latest book, Vulture’s Picnic: In Pursuit of Petroleum Pigs, Power Pirates and High Finance Carnivores. The event is a special Portland kick-off of his book tour and a benefit to support local community media.

Palast received international praise when he exposed voter fraud that threw the 2000 presidential election into question. Now the “most important reporter of our time” (Britain’s Tribune Magazine) has set his sites on bigger prey: the unholy alliance between energy giants, high finance and corrupt or complacent governments that produced record corporate profits while destroying lives and poisoning the planet.

Vulture’s Picnic reads like a spy thriller as Palast takes the reader from the oil-saturated beaches of the Gulf of Mexico, through the streets of Baku, to a Eskimo village facing environmental devastation and deep into the Amazon jungle. Along the way, Palast and his team receive confidential materials from an insider to the BP Deepwater Horizon disaster, search for a valise full of millions in Central Asia, and stand witness to the pain and suffering of people victimized by corporate greed.

This is Palast’s third visit to the Rose City to release a new book. In addition to his independent reporting and documentary production, the New York Times bestselling author (Armed Madhouse) reports for BBC television and the Guardian newspapers.  A long-time support of local media, Palast is committing net proceeds of the event to KBOO 90.7 FM community radio and The Portland Alliance. For more information on Greg Palast visit www.gregpalast.com.