10 Years in Afghanistan: End the Wars-Bring Our $$ Home 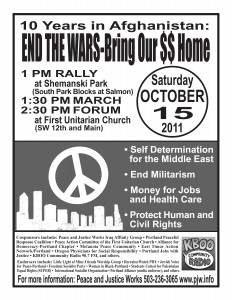 KBOO is a proud media sponsor for 10 Years in Afghanistan: End the Wars ~ Bring the $$ Home

RALLY, MARCH AND FORUM TO MARK
ANNIVERSARY OF 2001 AFGHAN INVASION
October 15, 2011 event to tie the economy to America's ongoing wars

On Saturday, October 15, 2011, there will be an action protesting the 10th anniversary of the US invasion of Afghanistan. The event begins with a rally at 1 PM in Shemanski Park (South Park Blocks at Salmon St), and a march at 1:30 PM will bring participants to the First Unitarian Church for a 2:30 PM forum. The theme of the event will be "10 Years in Afghanistan: End the Wars-Bring Our $$ Home." Speakers at the rally and forum will also address these topics:

October 15 has also been picked as a day of national action by the United National Antiwar campaign (http://nepajac.org/oct15page1.htm).

For more information or for your organization to get involved, contact Peace and Justice Works at 503-236-3065.