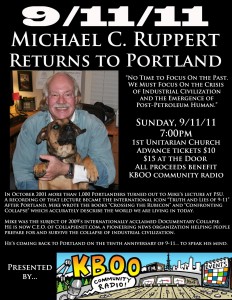 -- “No Time to Focus On Past. We Must Focus On the Crisis of Industrial Civilization, Limits to Growth and the Emergence of Post-Petroleum Human” --

KBOO is pleased to announce that Michael C. Ruppert, author of “Crossing the Rubicon”, “Confronting Collapse” and the subject of the 2009 critically acclaimed global documentary sensation “Collapse” will be speaking on the collapse of human industrial civilization, relocalization and a new species he calls Post-Petroleum Human at the First Unitarian church on the tenth anniversary of the attacks which changed the world forever. Mike’s appearance will also mark the tenth anniversary of his lecture before 1,000-plus at PSU which became the world-famous video “Truth and Lies of 9-11”

Over a long career, Ruppert, currently the Founder and C.E.O. of Collapse Network with members in 65 countries, and host of the hit Lifeboat Hour on the Progressive Radio Network, has been a pioneering investigative journalist breaking major exposés including the cover-up of the friendly-fire killing of pro-football star Pat Tillman in Afghanistan. He is probably best known for having accurately predicted the 2008 financial crash, Peak Oil and its impacts. In April of this year he issued a compelling and detailed alert on Collapsenet that warned of a major economic implosion, followed by massive civil unrest starting in late July which is still unfolding and leading to “the collapse of human industrial civilization”.

Far from being a pessimist, Ruppert is optimistic for the future of those, especially younger, generations who can see and adapt to a new and rewarding way of life centered around local food production, community, and balance and dialogue with the Earth that gives us life. An adherent of Gaian spirituality, Ruppert has been recently featured in the just-released critically-acclaimed Australian documentary Anima Mundi  which also includes interviews with David Holmgren – co-founder of Permaculture, John Seed – Deep Ecology, Stephan Harding – Gaian Ecology, Vandana Shiva – Human Rights, Michael Reynolds – Earthships (as seen in the movie Garbage Warrior), Noam Chomsky – Activism, Dr Mark O’Meadhra – Integrative Medicine, and Dr Christine James – Psychology