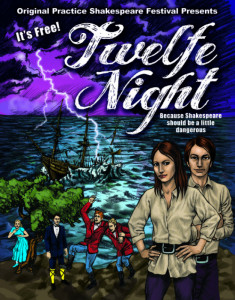 Non-profit theater company, Original Practice Shakespeare Festival (OPS Fest) is pleased to present William Shakespeare's Twelfe Night with the help of their core group of a dozen experienced actors, guest actors from across the country, and a large group of other local actors and artists.

Performance dates in the Portland, OR area (all Twelfe Night unless indicated) All performances are free!

Sunday, June 26 – 11am Kenton Park (Much Adoe About Nothing)

Sunday, July 17 – 2p, Laurelhurst Park (Much Adoe About Nothing)

OPS Fest is dedicated to bringing a new style of Shakespearean performance to Portland, and the surrounding area, by reviving the old. Our actors perform using the same performance techniques as they did in Shakespeare's own time, which means limited rehearsal; an onstage prompter; fast-paced, energetic acting; and lots of audience interaction!

Because Shakespeare should be a little dangerous.

Further information regarding OpsFest can be found on the website at www.opsfest.org.