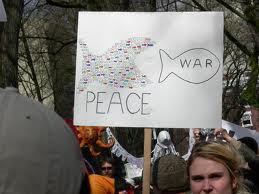 MARCH AND RALLY TO MARK ANNIVERSARY OF 2003 IRAQ INVASION

On Saturday, March 19, 2011, there will be a march and rally to mark the 8th anniversary of the US invasion of Iraq, tying the nation's failing economy to the occupations of Iraq and Afghanistan.

"Eight Years in Iraq -- Nine Years in Afghanistan: How is the War Economy Working for You?"
will take place at Pioneer Courthouse Square (SW 6th and Yamhill) in Portland, Oregon, and feature music, speakers, and a march through downtown Portland.

Topics to be covered by the event include:

--End the Wars and Occupations--Bring the Troops Home Now
--Fund Jobs, Healthcare and Human Needs, Not the War Machine
--Stand for Civil Rights at Home and Abroad
--Take Action!

For more information or for your organization to get involved, contact
Peace and Justice Works at 503-236-3065. To arrange for interviews with
event organizers or speakers, please call (503) 888-7455.