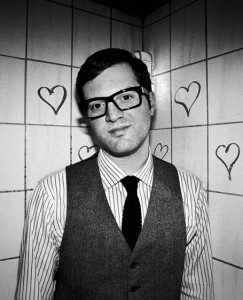 I'm just can't get over this guy- I'm fully sprung. Here's why:

Mayer Hawthorne grew up in Ann Arbor, Michigan,  just outside of Detroit, and vividly remembers, as a child, driving with  his father and tuning the car radio in to the rich soul and jazz  history the region provided. “Most of the best music ever made came out  of Detroit,” claims the singer, producer, and multi-instrumentalist, who  counts Isaac Hayes, Leroy Hutson, Mike Terry, and Barry White among his  influences, but draws the most inspiration from the music of Smokey  Robinson, Curtis Mayfield, and the legendary songwriting and production  trio of Lamont Dozier, Brian Holland, and Eddie Holland Jr.

Few expect such heartfelt sentiment to come  from a 29-year-old white kid from Ann Arbor, but he has caught the ear of his family at Stones Throw, as well as BBC Radio 1 host Gilles  Peterson and producer/DJ Mark Ronson. Expectations are high for the  admitted vinyl junkie who never planned on taking his crooning public.  Hawthorne’s hanging-by-a-string falsetto and breakbeat production on his  first recorded effort, the tender “Just Ain’t Gonna Work Out,” are  simultaneously Smokey and J Dilla – equal parts “The Tracks of My Tears”  and “Fall in Love.” “It’s soul,” he explains, “But it’s new.- (ripped this off the bio on Stones Throw yall)

His latest "I Need You" (produced by Nottz) is a dizzying, chopped n screwed plea, that  would be hella desperate if the steady beat was absent or, the soul  structure was void.  Check it here.   Mayer Hawthorne's work is released in super fresh styles too- whether it's the heart shaped  7"s or textured album covers, or the vinyl itself.   He doesn't forget about the craft behind the art. Check out the AWESOME mix he just dropped (yep- you can download it!).  And if you missed him at MFNW, I hear he's coming November 9th to The Aladdin Theatre.   You should really go.