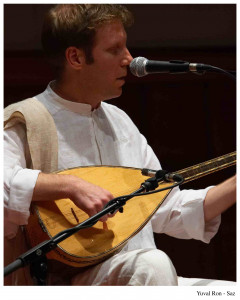 Mystical Music of the Middle East – Concert for Unity

I’m thrilled to help bring the Yuval Ron Ensemble back to Portland next week. The Yuval Ron Ensemble uses sacred music from the three Abrahamic faiths to make musical bridges between people of different cultures, to help prepare hearts to hear a message of tolerance and peace. The music is electrifying, and the multi-ethnic and multi-religious ensemble makes an artistic statement for Peace and Unity.

An interview of Yuval from last spring is on the KBOO website at www.kboo.fm/portlandyiddishhour  ... scroll through the audio to the picture of Yuval playing his Oud.

For videos, audio and more info about the music of Yuval Ron: www.yuvalronmusic.com

Admission: $15 at the door or online at: http://www.brownpapertickets.com/event/90746