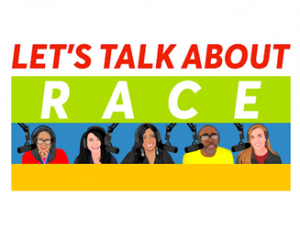 Portland, OR, December 13 2021 —Let’s Talk About Race , an intergenerational, roundtable discussion of independent national journalists who engage in  rigorous conversations and analysis of news coverage regarding the role race plays in politics, government, the  economy, education, and health.  LTAR currently airs nationally on the Pacifica Radio network -homebased at KBOO Radio in Portland, OR and archived on SoundCloud . Brown Hope provided seed money for this project.

LTAR brings independent journalists from all over the country from Oregon to Texas and Pennsylvania.  The hosts bring their own flavor, journalistic perspectives, and integrity to the show.  LTAR also incorporates clips from news outlets from around the Broadcast News world.

The roundtable line-up features: Lanita Duke, award-winning audio and video producer who has written, directed, and produced political news and commentary for Grassroots NW and KBOO Radio for over 45 years. Dianne Johnson, a journalist from Texas co-host/musicologist on From the Grassroots, a political news magazine.  Althea Billings, current News Director at KBOO Community Radio.  Cecil Prescod, talk-show host local, national, and international issues ranging from poverty in Portland to politics in Africa.  Nia Gray, host and blogger of The Faith Report and The Woke Church in Pittsburgh, Pennsylvania.  Mary Li, the Director of the Multnomah Idea Lab, a think tank in Portland, OR.