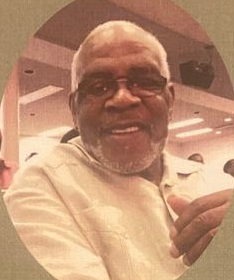 It is with a combination of deep sadness and incredible joy that I share news of the passing of a pillar of the KBOO family and community: Shaheed Haamid. Sadness that he is not here to share his light; joy because his faith moved him to spread his light far and wide...to be reflected in his work and in those who met and loved him.

Shaheed began his journey with KBOO in 1980, and during the next four decades, along with other members of Portland's Black Community, he ushered in the Soul Strip, The Islamic Point of View, The Jazz Continuum and Blues In The Morning, among others.

He and I were among the co-hosts for the Black public affairs program Proverbial Perspectives. Shaheed not only was the first Black President of the Board of Directors, he graciously returned two more times to serve despite major health challenges. I dearly appreciated and depended upon his intrepid desire to serve with dignity, integrity, skill and insight. Shaheed believed in showing up, doing the work with commitment; he was serious about striving for excellence. And, I should add foresight: Shaheed helped KBOO secure the endowment that began our path toward financial stability.

While pursuing one of his three degrees, Shaheed managed the University of Portland public radio station KDUP- also mentoring many U of P Radio/ Broadcast Journalism students. However, his broad vision encompassed so much more than radio: a prolific community media producer, Shaheed also produced cable access television shows and founded the Muslim American Media Initiative (MAMI), a media collective of over 8000 members dedicated to issues from an Islamic perspective.

A beacon, a powerhouse; knowledgeable, uncompromising, invested, compassionate and loving, insightful, stalwart, steadfast: Shaheed Abdullah Haamid. His legacy for KBOO is that we continue to reach for excellence as we serve our community with love. He is remembered!

Listen to an interview with Shaheed Haamid that he did for KBOO's 50th Anniversary in 2018. He talks about coming to KBOO in 1980, the different roles he served at KBOO, and his passion for radio.

Update Required To play the media you will need to either update your browser to a recent version or update your Flash plugin.
Topic tags:
Station Manager