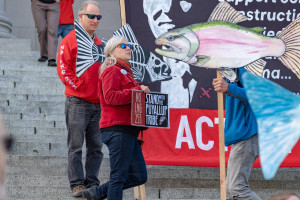 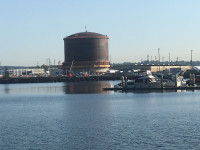 Nearly four years ago, as they were defeating the world's largest methanol refinery proposed for their port, activists in Tacoma found out that a large Liquid Natural Gas (LNG) distribution hub and storage facility was also being planned at the Port. Once they defeated the methanol refinery (which shifted its sights to Kalama, Washington, where it is still being fought), Tacoma activists refocused on stopping the LNG project. Four years later, after zig-zagging through many public hearings and protests, the Puget Sound Clean Air Agency (PSCAA) recently announced that they have approved the facility's clean air permit, so now construction can begin. Except that the 8 million gallon LNG storage tank, which started being built before the air permit was even approved, is nearly finished. But despite PSCAA's decision to allow the project to move forward, LNG opponents are not giving up.

On this episode of Locus Focus we talk again with Claudia Riedener, co-founder of Redefine Tacoma, about the continuing fight to stop the LNG facility.

Claudia Riedener is a ceramic artist, community leader and co-founder of the grassroots environmental group Redefine Tacoma. Originally from Switzerland, she has lived in Tacoma for 21 years and was a driving force in stopping the world’s largest methanol refinery from being built in Tacoma.