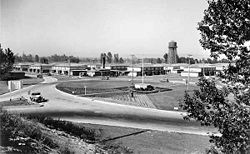 • Frann Michel discusses the history of Vanport, the need for public housing, and the importance of solidarity rather than individualism in social provisioning.

Coming up this weekend, May 27th through May 30th, the Vanport Mosaic Festival is a commemoration of the 68th anniversary of the Vanport Flood. KBOO is a supporter of these four days of lectures, performances, screenings, exhibits, and other events.

Built during World War 2 to house workers in the shipyards, Vanport became for a time the second largest city in Oregon, with its own schools, day care, hospitals, shops, and movie theater. Although it was built with federal funds and after Roosevelt's executive order prohibiting racial discrimination in defense industries and government, local officials enforced housing segregation on the basis of race. Still, Vanport was far more racially diverse than redlined Portland or the rest of exclusionary Oregon; the state's first black teachers and police were hired there, its schools were integrated, and the Vanport Interracial Council worked to establish a Portland office of the Urban League.

The buildings were flimsy, the location was marshland, and it was all swept away when the dikes holding back the Columbia River broke on Memorial day 1948. But among its other lessons, Vanport shows what is possible when a housing emergency is taken seriously. It was the largest federal housing project of the time.

Of course, other places have more extensive and successful histories with public housing. In the US, public housing goes back to the 19th century, with the development of alternatives to New York City tenements. As Matthew Gordon Lasner described it recently in the Nation magazine,

Nonprofit, subsidized housing . . . was just as important as strong building codes in making cities livable.... Some of the housing . . . was developed and managed by organizations set up by single benefactors. Other complexes were built by joint-stock companies designed to allow larger numbers of smaller investors to participate. Yet others were owned, and sometimes built, by the tenants themselves on a nonprofit, consumers’ cooperative basis, often with the support of trade unions. Along the way, local and state governments started to support private nonprofit housing with property-tax abatements and long-term low-interest construction loans.

Such programs grew more dramatically during the Depression, and in 1937 the US Housing Act established the Housing Authority, and provided funding to states "for the provision of decent, safe, and sanitary dwellings for families of low income."

Today, in larger Northern European cities, "between 20 percent and 60 percent of housing . . . is still publicly funded, and ... there are often no income ceilings and many upwardly mobile families choose to stay in their apartments." But in the US, Lasner points out,

the public housing program survived less than 40 years, . . . such was hostility to the idea and to the disenfranchised African Americans whom housing subsidies increasingly served. Initially, public housing drew a mixture of families: white and black, poor and working class; many were upwardly mobile. But as mass-suburbanization relieved pressure on city housing markets, those who could afford to do so left. Congress—pressured by builders to fund only housing that would not compete with the private market—forced cities to economize on construction, compounding the problem.

The devaluing of black lives and poor lives has contributed to a reluctance to support shared investments in social goods, like housing—like education, like health care. That reluctance fits just fine with the interests of those profiting from the current system of political economy. Indeed, it has been cultivated by those who share the interests of capital, and it has been supported by a long ideological campaign to persuade us of Margaret Thatcher's famous dictum that "There is no such thing as society." Builders and developers don't want subsidized housing—or anything else--driving down their profits. As Friedrich Engels pointed out in his writing on housing under capitalism, 'all the sermons liberals and reformists preach to capital about the profitability of low-cost housing are a waste of time. Capital has ignored the mass housing field because greater profits are to be made elsewhere, and profits, not human need, are the sole criteria of whether capitalism produces.'

And of course capitalism has produced housing in Portland—it's produced very expensive housing.

But in the interests of our collective social well-being, we need to work for enacting the recommendations of the Portland City Club report, endorsed also by the editorial board of Street Roots:

But among the most immediately impactful is the committee’s call for lifting the state pre-emption of rent control. Rent control and similar stabilization measures are banned in Oregon, while no-cause evictions that clear buildings are allowed.

Stopping no-cause lease terminations that give renters little control over their living situations, and replacing them with a "just-cause" eviction law similar to Seattle's, as well as controlling the massive rent increases we 've been seeing, are two ways to start saving people's lives.

The dike has been breached; the flood is here. Surely, again, we can recognize and help our neighbors.

Update Required To play the media you will need to either update your browser to a recent version or update your Flash plugin.
Download audio file
Topic tags:
Race, African American, History, Housing/Homelessness, Legislation